The end of the European Football season is coming into view.
In some leagues the battle for the title, or against relegation is reaching a peak of intensity.
Nails are being bitten throughout the continent…unless you are a fan of one of those teams who are running away with their League – Bayern Munich, Juventus, Celtic…Luton Town.
In their fifth season since relegation from the Football League to the Conference, Luton are sitting pretty in the sole automatic promotion place.
Simon is desparately attempting to balance his “lucky” Christmas-cracker moustache until promotion is mathematically certain. Personally, I think that this is taking the concept of keeping a stiff upper-lip to extremes. 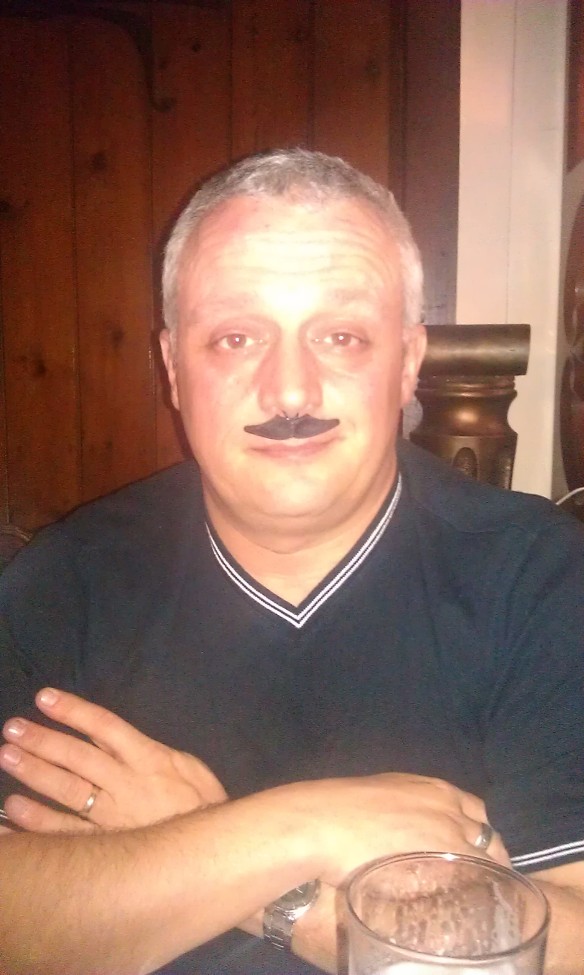 “I’ll shave it off when we’re definitely up !”

With the aid of a recent Conference League Table, I’m going to explore the Preprocessor feature of External Tables.
We’ll start with a simple example of how data in an External Table can be processed via a shell script at runtime before the results are then presented to the database user.
We’ll then demonstrate that there are exceptions to the rule that “Simple is Best” by driving a coach and Trojan Horses through the security hole we’ve just opened up.
Finally, in desperation, we’ll have a read of the manual and implement a more secure version of our application.

So, without further ado…

We have the league table in a csv called conference_table.csv :

In order to load this data into an External Table, we’ll need a Directory Object in the database that points to an OS directory where this file is located.
In this case, we have a Directory Object called MY_FILES which has been created thus :

If we now want to access the data in this file, we simply need to copy it to the OS directory pointed to by our Directory Object, make sure that the ORACLE os user can read the file, and then point an external table at it.
So…

As you can see, whilst oracle does not own this file it will have read access to it, as will any other OS user.

And as for our common-or-garden External Table :

Using this, we can now see just who is top of the pile in the Conference…

So far, so good. However, say we wanted to ensure that all of the team names were in upper case when they were loaded into the database ?
OK, this is a fairly trivial requirement, but it does give me the excuse to knock up a simple demonstration of how to implement a Preprocessor for this file.

The shell script to achieve this is relatively simple. If we were just going to run it from the OS, it would look something like this :

The argument passed into the script is the name of the csv file.
In order to make this script suitable for our purposes however, we’ll need to modify it a bit.
Bear in mind that both the cat and tr commands are executed based on what’s in the $PATH variable of the session in which the script is running.
As we can’t guarantee that this variable will be set at run time when the script is invoked from the database, we need to fully qualify the path to these executables.
If you need to work out the path to these executables, you can simply run the following at the command line :

Now we can amend the script to read :

I’ve created this file as the oracle os user and saved it into the same directory as the csv file.
What could possibly go wrong ? We’ll come back to that in a bit.

For now, all we need to do is to make the file executable :

Now, finally, we can re-create our External Table as follows :

Seems reasonable. After all, minimizing the number of Directory Objects in the database will also minimize the number of possible entry points for any would be directory based attacks right ? Hmmm.

Anyway, we can now check that the preprocessor does it’s work by re-issuing our query :

Well, that all seems to work perfectly. But is it secure ?

Footballing rivalry in the database

To demonstrate the sort of problems that you could encounter with this External Table as it’s currently defined, we need to return to the land of the Trojan Horse.

Consider two users who need access to the External table we’ve just created.
We’ll call them Achilles and Hector.
If you really want a back-story, Hector is a keen Olympiakos fan, basking in the glory of their runaway lead at the top of the Greek Super League. Achilles supports Panathinaikos and is a bit fed-up with Hector giving it large about how great his team is. The fact that matches between the two teams are referred to as The Derby of the Eternal Enemies adds and extra frisson of tension around the office.

Both of them have the CREATE SESSION privileges and have been granted the DATA_PROCESS_ROLE, which is created as follows :

Just in case you want to play along, the two users have been created like this :

A point to note here is that the EXECUTE permission on the Directory Object is required for users to be able to access preprocessor program.

Achilles has decided to take Hector down a peg or two by creating a bit of mischief. He’s heard about this external table pre-processing and wonders if he might be able to use it to help him in his plan.

Before he sets about building his Wooden Horse, Achilles does some planning…

First, Achilles finds out about the privileges he currently has :

Looks like the CONFERENCE_TAB_XT might be the type of external table he’s looking for.
He checks this in his IDE ( SQLDeveloper in this case).
Open the object and ask for the source SQL and :

The final step in the planning process is to find out what the toupper.sh script does.
As he’s got READ and WRITE to the Directory, Achilles can do this :

He saves the code to a file called read_shell_script.sql. When he runs it :

Wheeling the horse to the gates…

Achilles now has all the information required to implement his attack.
At this point, he could do whatever he wanted. Remember, the shell script is executed as the oracle user on the os. The oracle user that owns the database.

What he actually decides to do is…

This works as expected. After all, as well as Achilles having write access to the MY_FILES directory object in the database, the oracle user on the OS also has write privileges on the toupper.sh file.
Anyway, once this code has run, the shell script now looks like this :

Of course, being a Trojan, the program hasn’t done anything yet. Achilles leaves everything as is at the moment.

A short while later, Hector decides to find out how things look at the top of the Conference ( he’s a bit of a European Football geek, truth be told) :

The query works as expected and Hector is none-the-wiser. Next time he goes to login howerver, he gets an unpleasant surprise :

After a couple of days of the DBA getting annoyed at Hector because he can’t “remember” his password, Achilles simply changes the script back :

When all else fails – Read the Manual

Clearly the solution we’ve implemented here has one or two issues.
On reflection, it might have been quite a good idea to look at the documentation on the subject of preprocessor security.

From this, we can see that there a number of steps we can take to prevent this sort of attack.

So, the first step then is to create the OS directory and then a Directory Object in the database that points to it :

…and the new Directory Object :

File permissions on the OS

Once we’ve done this, we can re-create toupper.sh in our new preprocessor OS directory and remove it from it’s original location.
Whilst we’re doing this, it’s probably worth bearing in mind that the oracle OS user only needs execute permissions on the file.
There’s nothing to stop it being owned by a different OS user. So, for example, I could create toupper.sh as mike and do the following :

Now, whilst the oracle user can still execute (and read) the file, it cannot write to it. So, even if a user has write permissions on the PRE_PROC_DIR directory object in the database, they won’t be able to change the file itself.

The next step is to re-create our External Table to use the new preprocessor location :

Finally, we need to modify the grants to the DATA_PROCESS_ROLE so that users can still access the table :

Let’s see how (and indeed, whether) these changes prevent this kind of attack.

Now when he comes to read or write the shell script it’s located in PRE_PROC_DIR, a directory to which he only has EXECUTE privileges. Now, he’ll get :

Other points to note

Of course, given a different set of object privileges, it would still be possible for Achilles to cause some mischief by exploiting the External Table preprocessing functionality.
Perhaps the most pertinent privilege here would be CREATE ANY DIRECTORY.
If you have this privilege then you will also have full rights on any Directory that you create. Remember, there is nothing to stop you having multiple Directory Objects that point to a single OS directory.
If Achilles had this privilege, and we had not removed the oracle OS user’s read/write privilege on our preprocessor program, then he could simply have created his own Directory Object in the database and used that to execute the same attack.
The Oracle documentation also mentions some auditing steps that you might consider. In addition to auditing the DROP ANY DIRECTORY privilege, I’d also suggest auditing CREATE ANY DIRECTORY.
I think the other point to note here is that, whilst auditing may serve as a deterrent, it does nothing to actively prevent this kind of thing happening.

This site uses Akismet to reduce spam. Learn how your comment data is processed.