Teddy has observed the recent General Election campaign with some interest and has concluded that he has what it takes to be the next Prime Minister.

It’s not just the haircut, which does now look extremely Prime Ministerial… 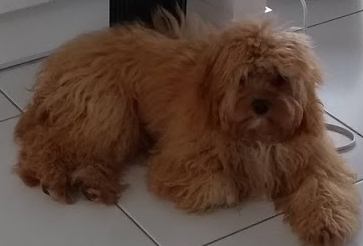 Politics is a robust business but Teddy’s more than capable of playing “ruff” :

He firmly believes in the need to streamline Government at Cabinet level, which has the incumbent Chief Mouser to the Cabinet Office a little nervous.
He’s also well used to being followed around by a “pooper scooper”. And not to put too fine a point on it, there’s more than one reason that he’s known as a “shaggy” dog.

If he’s going to make it in politics, Teddy knows that he doesn’t have time to waste waiting for that pesky long-running job he’s just started. Oh no, he needs to use his evenings to get on with building his power base.
Fortunately, Oracle facilitates detached execution of PL/SQL blocks by means of the DBMS_SCHEDULER package. Now, I know what you’re thinking, that’s going to involve a lot of fiddly setup with schedules and windows and chains and stuff. Well, you may be pleasantly surprised…

Teddy has a packaged procedure that he needs to test :

Normally, he’d kick it off in a simple PL/SQL block :

Unfortunately, it’s almost time to leave for the day and he doesn’t trust Windows not to do an update and reboot itself.

Fortunately, Teddy’s not above a (quick and) dirty trick…

He’s created a DBMS_SCHEDULER job on-the-fly. The job is set to run immediately by setting the start_date to now. The job will be dropped once it’s completed ( auto_drop set to true).

Run this and it returns almost immediately. That’s because the job has been submitted rather than the PL/SQL block having finished.
If we want to check progress, we can take a look at the scheduler views…

When the job starts, we can see it in USER_SCHEDULER_JOBS :

If, for any reason, Teddy needs to terminate the job, he can simply run :

As noted previously, the job will drop itself on completion at which point it will disappear from these views.

To see the outcome of the job :

Sometimes we need further details. For example, if the job failed, the error stack will be included in the
ERRORS column of the USER_SCHEDULER_JOB_RUN_DETAILS views :

This site uses Akismet to reduce spam. Learn how your comment data is processed.