When I started programming, the world was black and white. I’d write my code in Vi on Unix ( Sequent’s dynix/ptx if you want to get personal) and then run it through a compiler to find any errors. End of story, [Esc]:wq!.
Then, along came GUI IDEs with their white backgrounds and syntax colouring.
Things now seem to have come full circle as the colour schemes currently en vogue for IDEs tend to look a bit like this : 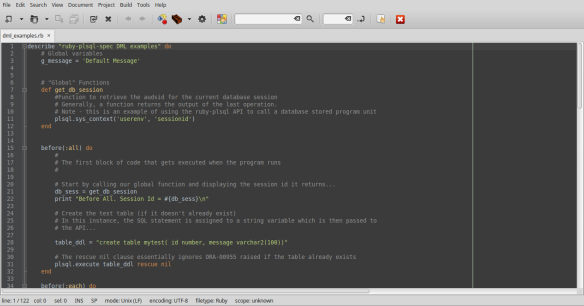 Finding a lightweight, general purpose IDE for Linux has been something of a quest for me. It’s not that there aren’t any out there, it’s just that none of them quite seemed to be exactly what I was looking for. Until now.

Look, I know that programmers tend to be rather attached to their favourite editor/IDE and this post is not an attempt to prise anyone away from their current toolset. It is simply an account of how I managed to install and configure Visual Studio Code in Ubuntu to use for Python.

Hang on, lightweight ? We’re talking about Microsoft Visual Studio, right ?
Actually, Visual Studio Code (VS Code) is a rather different beast from the Visual Studio Professional behemoth that’s used for knocking up .Net applications on Windows.

What I’m going to cover here is :

If you’ve stumbled across this post in the hope of finding some information about setting up VS Code for PL/SQL, I would refer you to Morten Braten’s excellent post on the subject.

Here and now though, it’s Python all the way… END_OF_DOCUMENT_TOKEN_TO_BE_REPLACED